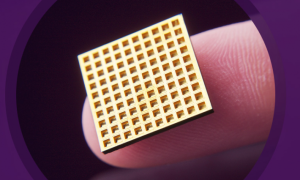 When an electrical current is delivered to one of the chip’s tiny reservoirs, a single does of therapeutics releases into the body.
Image: MIT/Microchips Biotech

After extensive research, MIT engineers are on their way to commercializing microchips that release therapeutics inside of the body.

The implantable microchip-based device has the potential to outpace injections and conventional pills, changing the landscape of health care and treatment as we know it.

A startup stemming from MIT, Microchips Biotech, developed this technology and has partnered with Teva Pharmaceutical to get these chips into the market. Teva Pharmaceutical is a giant in the industry and the world’s largest producer of generic drugs.

The microchips consist of hundreds of pinhead-sized reservoirs, each capped with a metal membrane, that store tiny doses of therapeutics or chemicals. An electric current delivered by the device removes the membrane, releasing a single dose. The device can be programmed wirelessly to release individual doses for up to 16 years to treat, for example, diabetes, cancer, multiple sclerosis, and osteoporosis.

The device also has the ability to improve a patient’s pill taking regimen, which turns out to be a rather costly issue. According to the Annals of Internal Medicine, Americans that do not adhere to the medications prescribed to them run around $100 billion to $289 billion annually in unnecessary health care costs to re-admittance after patients fail to comply with medication prescriptions.

One of the researchers working on the product sees it as more than a chip—something more akin to an artificial organ with its hormone-releasing abilities.

Learn about more of science’s amazing biomedical applications, including Alvin J. Salkind’s work on the transtelephonic monitoring system and defibrillators.

And see him and other leaders in science in the ECS Masters series!