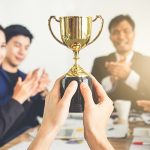 Nominations are now being accepted for the new ECS Corrosion Division Rusty Award for Mid-Career Excellence. The award was established recently by the ECS Honors and Awards Program and Corrosion Division to recognize a mid-career scientist or engineer’s achievements and contributions to the field of corrosion science and technology.

A framed certificate; US $1,000 prize; and complimentary meeting registration are awarded to the recipient. The award is bestowed at the fall ECS biannual meeting; the recipient is expected to lecture on their research at a designated ECS Corrosion Division symposium during that meeting. Up to US $1,000 may be available to assist with travel expenses to facilitate attendance at the meeting.

The award is given to a scientist or engineer who has contributed to the field of corrosion science and technology. The nominee must have been an ECS Corrosion Division member for at least five consecutive years; published in an ECS journal; and satisfy one of the following: