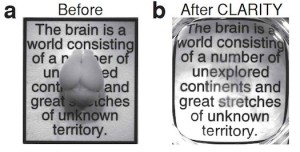 The process CLARITY uses a series of chemical reactions to stabilize organs and make them transparent to the naked eye. This has allowed scientists to look at organs in a whole new way. Read the article on the process here.

Check out the amazing video of the see-through organs below:

On the other hand, Disseroth’s optogenics technique allows scientist to narrow their focus on specific disorders.

Scientists genetically engineered the mouse so that its brain cells turn certain genes on or off when scientists shine laser light onto them. The light enters the mouse’s brain through that optical fiber you see in the photo. Optogenetics lets scientists perform experiments on genes they may be associated with certain disorders, but whose functions are mysterious.

Head over to the Digital Library to see our most recent papers on new electrochemical biomedical processes.

P.S. Make sure to sign up for our free e-Alerts to stay on top of the latest research in your field.