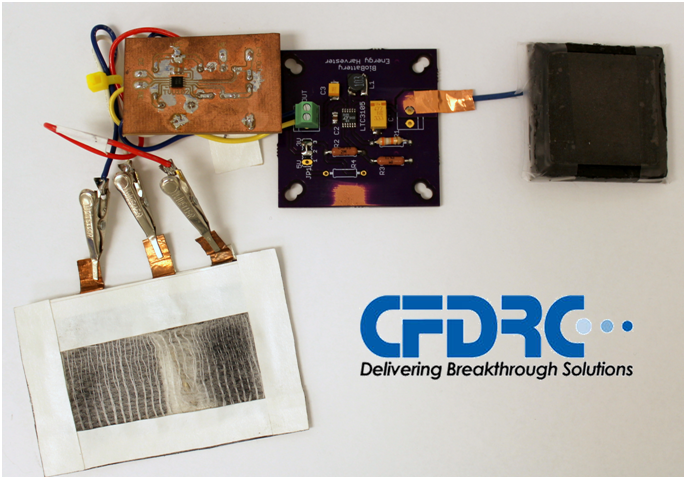 It may be clammy and inconvenient, but human sweat has at least one positive characteristic – it can give insight to what’s happening inside your body. A new study published in the ECS Journal of Solid State Science and Technology aims to take advantage of sweat’s trove of medical information through the development of a sustainable, wearable sensor to detect lactate levels in your perspiration.

“When the human body undergoes strenuous exercise, there’s a point at which aerobic muscle function becomes anaerobic muscle function,” says Jenny Ulyanova, CFD Research Corporation (CFDRC) researcher and co-author of the paper. “At that point, lactate is produce at a faster rate than it is being consumed. When that happens, knowing what those levels are can be an indicator of potentially problematic conditions like muscle fatigue, stress, and dehydration.”

Using sweat to track changes in the body is not a new concept. While there have been many developments in recent years to sense changes in the concentrations of the components of sweat, no purely biological green technology has been used for these devices. The team of CFDRC researchers, in collaboration with the University of New Mexico, developed an enzyme-based sensor powered by a biofuel cell – providing a safe, renewable power source.

Biofuel cells have become a promising technology in the field of energy storage, but still face many issues related to short active lifetimes, low power densities, and low efficiency levels. However, they have several attractive points, including their ability to use renewable fuels like glucose and implement affordable, renewable catalysts.

“The biofuel cell works in this particular case because the sensor is a low-power device,” Ulyanova says. “They’re very good at having high energy densities, but power densities are still a work in progress. But for low-power applications like this particular sensor, it works very well.”

In their research, entitled “Wearable Sensor System Powered by a Biofuel Cell for Detection of Lactate Levels in Sweat,” the team powered the biofuel cells with a fuel based on glucose. This same enzymatic technology, where the enzymes oxidize the fuel and generate energy, is used at the working electrode of the sensor which allows for the detection of lactate in your sweat.

While the use of the biofuel cell is a novel aspect of this work, what sets it apart from similar developments in the field is the use of electrochemical processes to very accurately detect a specific compound in a very complex medium like sweat.

“We’re doing it electrochemically, so we’re looking at applying a constant load to the sensor and generating a current response,” Ulyanova says, “which is directly proportional to the concentration of our target analyte.”

Originally, the sensor was developed to help detect and predict conditions related to lactate levels (i.e. fatigue and dehydration) for military personnel.

“The sensor was designed for a soldier in training at boot camp,” says Sergio Omar Garcia, CFDRC researcher and co-author of the paper, “but it could be applied to people that are active and anyone participating in strenuous activity.”

As for commercial applications, the researchers believe the device could be used as a training aid to monitor lactate changes in the same way that athletes use heart rate monitors to see how their heart rate changes during exercise.

The team is currently working to redesign the physical appearance of the patch to move from laboratory research to on-body tests. Once the scientists optimize how the sensor adheres to the skin, its sweat sample delivery/removal, and the systems electronic components, volunteers will test its capabilities while exercising.

“We had actually talked about this idea to some local high school football coaches,” Ulyanova says, “and they seem to really like it and are willing to put forth the use of their players to beta test the idea.”

After initial data is gathered, the team will be able to work with other groups to interpret the data and relate it to the physical condition of the person. With this, predictive models could be built to potentially help prevent conditions related to individual overexertion.

Future plans for the device include implementing wireless transmission of results and the development of a suite of sensors (a hybrid sensor) that can detect various other biomolecules, indicative of physical or physiological stressors.