Michael H. Hecht delivered the ECS Lecture, Electrolysis on Mars: MOXIE and the Perseverance Mission, at the Plenary Session of the 240th ECS Meeting on October 11, 2021. Answers to questions posed during his lecture follow. 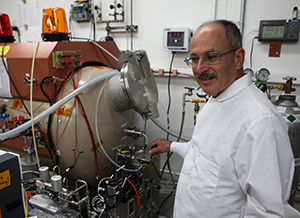 Michael Hecht is the Associate Director for Research Management at the Massachusetts Institute of Technology (MIT) Haystack Observatory. Since 2013, he has been Principal Investigator for the Mars Oxygen In-Situ Resource Utilization Experiment (MOXIE) instrument on NASA’s Mars 2020 Rover (Perseverance) mission, a technology demonstrator to validate the instrumentation and methodology to produce large quantities of oxygen from the Martian carbon dioxide atmosphere using solid oxide electrolysis (SOXE). From September 2019 to August 2020, Professor Hecht served as Deputy Project Director for the Event Horizon Telescope, the consortium that in 2019 delivered the first image of a black hole. His diverse experiences span planetary missions, observational astrophysics, space instrument and SmallSat development, planetary science, and project, program, and line management. Prior to joining MIT, he worked for 30 years at the NASA Jet Propulsion Laboratory (JPL), developing instrumentation for planetary missions. There he achieved the designation of Senior Research Scientist. At JPL, he served as Principal Investigator and Instrument Manager for the MECA (Microscopy, Electrochemistry, and Conductivity Analyzer) instrument on the Phoenix Mars mission. MECA operated through the summer of 2009, with major findings in microscopy, the physical chemistry of water in soil, and notably, in aqueous soil chemistry using electrochemical methods.

Prof. Hecht received his PhD in Applied Physics at Stanford University in 1982 after completing his BA in Physics at Princeton University and MS at MIT. His research has garnered numerous awards including the 2020 Breakthrough Prize in Fundamental Physics and 1990 Lew Allen Award for Excellence. His h-index is 51 with over 11,500 citations. END_OF_DOCUMENT_TOKEN_TO_BE_REPLACED

A new breakthrough in energy harvesting could potentially power life on other habitable planets.

The new development out of Northumbria University incorporates an innovative technique to harvest energy from carbon dioxide.