Silicene Moves Us toward Super-Fast Computers

Researchers have created the first transistor out of silicene, the world’s thinnest silicon material.
Image: University of Texas at Austin

There’s an exciting new development in the world of single-atom thick materials, and surprisingly it doesn’t revolve around graphene.

Instead, scientist have shifted their attention to silicene: an exotic form of silicon that has fantastic electrical properties for computer chips.

Like graphene, silicene is a single-atom thick material that allows electrons to flow through it at amazingly high speeds. However, silicene does not occur naturally like graphene – it instead has to be grown in the lab on a sheet of silver.

Because of the difficulty encountered when attempting to produce silicene, its properties have only been theoretical until now. Recently, Deji Akinwande of the University of Texas at Austin turned his attention to this material and found a way to make a transistor out of silicene.

END_OF_DOCUMENT_TOKEN_TO_BE_REPLACED 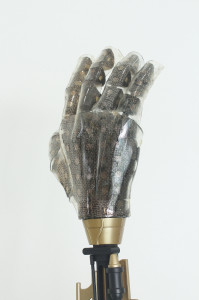 We’ve talked about the advancements in prosthetic limbs in the past, but now a group of researchers out of Seoul National University are taking innovation in prosthetics one step further with this new “smart skin.”

Researchers from the Republic of Korea have developed a stretchy synthetic skin embedded with sensors, which will be able to help those with prosthetics regain their sense of touch.

This from “Stretchable silicon nanoribbon electronics for skin prosthesis” in the journal Nature Communications: