Arumugam Manthiram Named First Recipient of the John B. Goodenough Award of The Electrochemical Society 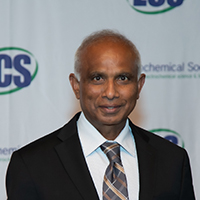 The Electrochemistry Society (ECS) is pleased to announce that Professor Arumugam Manthiram, George T. & Gladys H. Abell Endowed Chair of Engineering at the University of Texas at Austin, has been named the first recipient of the newly created John B. Goodenough Award of The Electrochemical Society. The Goodenough award recognizes distinguished contributions to the fundamental and technological aspects of electrochemical materials science and engineering. Professor Manthiram’s major contributions to the field include pioneering fundamental and technological contributions to electrochemical energy conversion and storage, involving the development of new materials, advanced characterization, structure-property-performance relationships, and prototype devices. Key examples include the development of sustainable, low-cost, durable materials for batteries and fuel cells, as well as delineation of the intricacies involved with ion and electron transport and magnetic interactions in transition-metal oxides. The award will be presented during the 243rd ECS Meeting in Boston, MA, from May 28 to June 2, 2023. Prof. Manthiram will deliver his award address at that meeting.

“The Electrochemical Society is honored to bestow the first ECS Goodenough Award to Prof. Arumugam Manthiram, a dedicated member and supporter of ECS, renowned for his exceptional scientific contributions and superior teaching. This tribute is especially fitting given Arumugam’s long-term relationship with Prof. Goodenough. From serving as a postgraduate researcher with Prof. Goodenough at Oxford University in 1985, to delivering the 2019 Chemistry Nobel Prize Lecture in Stockholm on John’s behalf, this award is a wonderful tribute to their enduring collaboration,” said Christopher Jannuzzi, ECS Executive Director and Chief Executive Officer.

Arumugam Manthiram researches rechargeable batteries and fuel—specifically, developing low-cost, efficient, durable materials for batteries and fuel cells and fundamental understanding of their structure-property-performance relationships. He received his PhD in Solid State Chemistry from the Indian Institute of Technology Madras in 1980. Named Assistant Professor in the Walker Department of Mechanical Engineering at the University of Texas at Austin (UT Austin) in 1991, he was promoted to Professor in 2000. From 2011 through 2022, he served as the Director of the Texas Materials Institute and the Materials Science and Engineering Graduate Program.

Prof. Manthiram joined ECS in 1995. He served on many ECS committees and award subcommittees and assumed volunteer positions, including Chair of the ECS Texas Section (2006-2007) and ECS Battery Division (2010-2012). He founded the ECS UT Austin Student Chapter in 2006 and continues as its Faculty Advisor today.

John B. Goodenough Award of The Electrochemical Society

ECS announced the creation of the John B. Goodenough Award of The Electrochemical Society at Nobel laureate and longtime ECS member John B. Goodenough’s 100th Birthday Celebration on July 25, 2022. Throughout his career, Goodenough has been active with the Society as an admired and beloved member, author, fellow, awardee, meeting participant, professor, and more. Recipients of the award in his name are renowned for paradigm-shifting contributions in the fields of electrochemical and/or solid state science and exceptionally creative experimental or theoretical studies that open new directions in electrochemical energy storage, electrocatalysis, and/or solid ion conductors and high temperature materials for electrochemical devices. Learn more about the award and John Goodenough.