Some Catalysts Contribute Their Own Oxygen for Reactions 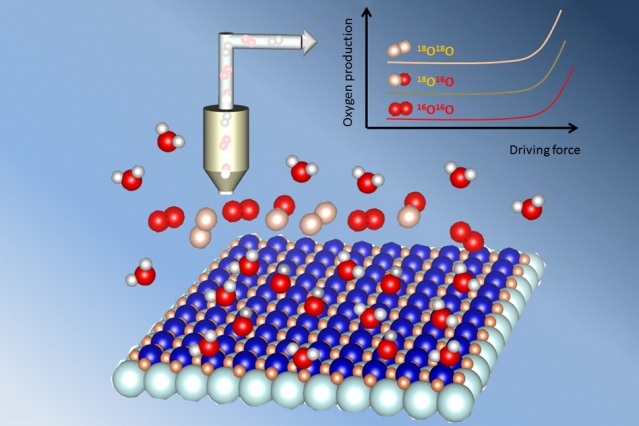 The future of renewable energy heavily depends on energy storage technologies. At the center of these technologies are oxygen-evaluation reactions, which make possible such processes as water splitting, electrochemical carbon dioxide reduction, and ammonia production.

However, the kinetics of the oxygen-evolution reactions tend to be slow. But metal oxides involved in this process have catalytic activities that vary over several orders of magnitude, with some exhibiting the highest such rates reported to date. The origins of these activates are not well-understood by the scientific community.

A new study from MIT, led by 2016 winner of the Battery Division Research Award, Yang Shao-Horn, shows that in some of these catalysts, the oxygen does not only come from surrounding water molecules – some actually come from within the crystal lattice of the catalyst material itself.

Upon testing the oxygen output from the reaction, using a mass spectrometer that can directly measure the different isotopes based on their atomic weight, they showed that a substantial amount of oxygen-18, which cannot be accounted for by a surface-only mechanism, was indeed being released. The measurements were tricky to carry out, so the work has taken some time to complete. Diaz-Morales “did many experiments using the mass spectrometer to detect the kind of oxygen that was evolved from the water,” says Shao-Horn, who has joint appointments in the departments of Mechanical Engineering and Materials Science and Engineering, and is a co-director of the MIT Energy Initiative’s Center for Energy Storage.

The team believes they will be able to explore new ways of tuning the electronic structure of the metal-oxide materials to increase the reaction rate.