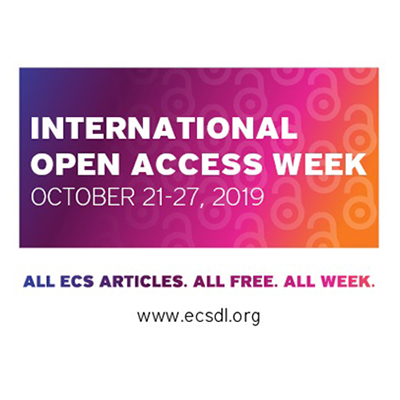 During International Open Access Week 2019 (October 21-27), an event organized by the Scholarly Publishing and Academic Resources Coalition (SPARC), the Society took down the paywall to the ECS Digital Library for the fifth consecutive year, making over 151,000 scientific articles and abstracts free and accessible to everyone. The event facilitated record-breaking surges in access of ECS content.

Open Access Week 2019  drew over 38,850 new visitors to the ECS Digital Library. New and old visitors downloaded content at an incredible rate. During October 2019, the Society’s active subscription-based publications amassed a total of 342,997 full-text downloads—16 percent more downloads than in October 2017 (when the annual event was last held), and the second highest download rate during a single month in the history of the ECS Digital Library.

These exceptional upswings in usage indicate two key things: (1) the far-reaching value of ECS publications, and (2) the economic barriers that continue to block scientists around the world from access to high quality, peer-reviewed research.

ECS participates in Open Access Week to showcase the potential of its Free the Science initiative, which aims to eliminate these barriers for researchers through an embrace of open science and transformative change in the traditional models of communicating scholarly research. The Society is committed to its long-term goal to make its publishing model 100 percent open access, but cannot reach this goal without the support of its readers and donors.

The Society thanks all the readers who participated in Open Access Week 2019 by downloading ECS content, and encourages all those who believe in the open dissemination of science to donate to the Free the Science Fund. Help make ECS research free to access all year round through the Free the Science initiative.