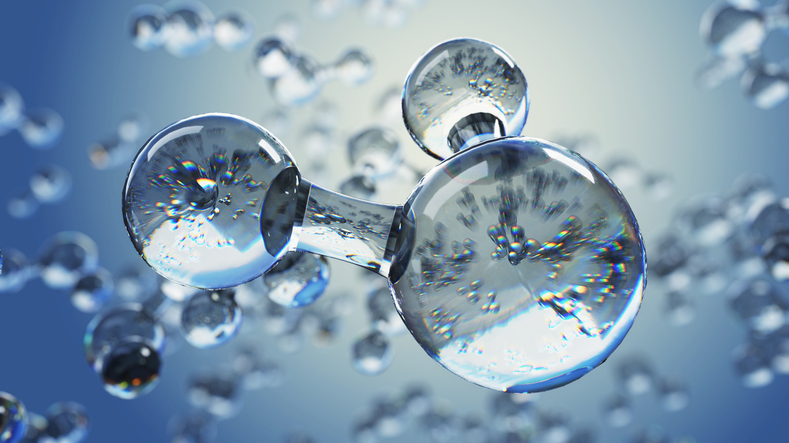 END_OF_DOCUMENT_TOKEN_TO_BE_REPLACED

Hydrogen has many highly sought after qualities when it comes to clean energy sources. It is a simple element, high in energy, and produces nearly zero harmful emissions. However, while hydrogen is one of the most plentiful elements in the universe, it does not occur naturally as a gas. Instead, we find it combined with other elements, like oxygen in the form of water. For many researchers, water-splitting has been a way to isolate hydrogen for use in cars, houses, and other sustainable fuels.

But water-splitting requires an effective catalyst to speed up chemical reactions, while simultaneously preventing the gasses to recombine. Researchers from the DOE’s SLAC National Accelerator Laboratory believe they may have the answer with the new development of a molybdenum coating that can potentially improve water-splitting.

“When you split water into hydrogen and oxygen, the gaseous products of the reaction are easily recombined back to water and it’s crucial to avoid this,” says Angel Garcia-Esparza, lead author of the study. “We discovered that a molybdenum-coated catalyst is capable of selectively producing hydrogen from water while inhibiting the back reactions of water formation.”

END_OF_DOCUMENT_TOKEN_TO_BE_REPLACED

Hydrogen has many highly sought after qualities when he comes to clean energy sources. It is a simple element, high in energy, and produces almost zero pollution when burned. However, while hydrogen is one of the most plentiful elements in the universe, it doesn’t occur naturally as a gas – instead, it’s always combined with other elements. That’s where efforts in water-splitting come in.

If researchers can effectively split water molecules into oxygen and hydrogen, new branches of hydrogen production could emerge.

Turner and his team are working on a method to boost the longevity of highly efficient photochatodes in photoelectrochemical water-splitting devices.

“Electrochemistry nowadays is really the key,” Turner told ECS during a podcast in 2015. “We have fuel cells, we have electrolyzers, and we have batteries. All of the things going on in transportation and storage, it all comes down to electrochemical energy conversion.”

END_OF_DOCUMENT_TOKEN_TO_BE_REPLACED 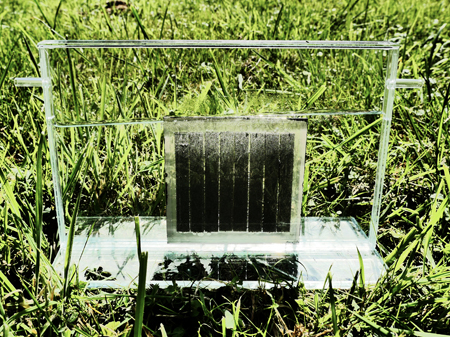 Artificial photosynthesis has carved out a promising corner in renewable energy research in recent history. This novel process is solar-driven, harvesting renewable energy and storing in in chemical bonds. Breakthroughs in artificial photosynthesis could lead to the development of solar fuels that could potentially shift the energy infrastructure.

In a recently published paper, the team of scientists state that they have developed the first complete and compact design for an artificial photosynthesis facility.

END_OF_DOCUMENT_TOKEN_TO_BE_REPLACED 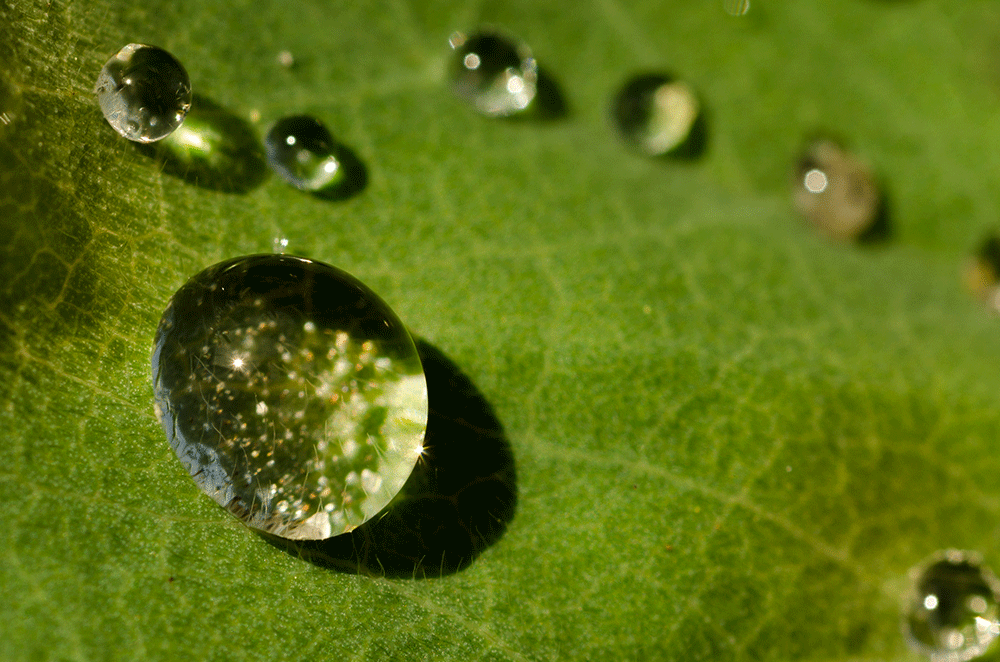 Graetzel, known for his low-cost, high-efficiency solar cell that won him the 2010 Millennium Technology Grand Prize, helped lead the effort by separating the positive and negative electrodes using a bipolar membrane, leading to a simple yet effective new method.

The technology behind water-splitting is essential in an economy shifting toward more hydrogen use as alternative fuels. While efficient methods of generating hydrogen do currently exist, the techniques used to produce the gas consume large amounts of fossil fuels.

Moving toward a hydrogen economy could help alleviate the effects of climate change, but only if the means used to produce the gas are also sustainable. This is where water-splitting comes in.

END_OF_DOCUMENT_TOKEN_TO_BE_REPLACED

Moving Closer to the Widespread Adoption of Water-Splitting

In an effort to move away from fossil fuels toward a renewable future, researchers have invested time and resources into developing hydrogen fuel. The most efficient way to create this sustainable fuel has been through water-splitting, but the process is not perfect. Now, researchers from MIT, the Skoltech Institute of Technology, and the University of Texas at Austin believe they may have made a breakthrough that could lead to the widespread adoption of water-splitting to produce hydrogen fuel.

The key discovery in the paper published in Nature Communications is the mobilization of oxygen atoms from the crystal surface of perovskite-oxide electrodes to participate in the formation of oxygen gas, which can speed up water-splitting reactions.

The breakthrough could be a crucial step in helping the energy infrastructure efficiently move away from traditional energy sources to renewables.

But the new results didn’t come out of the woodwork. The data illustrates collaborative work across experimental and theoretical fields. The new work essentially explains over 40 years of theory and experiments, looking at why some approaches worked and others failed.

“If we could develop catalysts made with Earth-abundant materials that could reversibly and efficiently electrolyze water into hydrogen and oxygen, we could have affordable hydrogen generation from renewables — and with that, the possibility of electric cars that run on water with ranges similar to gas powered cars,” Mefford said. 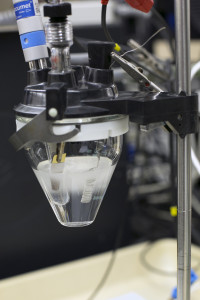 In order to satisfy growing energy demands, scientists are looking for ways to develop and deploy a broad range of alternative energy sources that can be both efficient and environmentally friendly. At Missouri University of Science and Technology, a team is working to make clean energy more accessible through the development of a cheap, simple way to split hydrogen and oxygen through a new electrodeposition method.

ECS member and head researcher in the project, Jay Switzer, believes that the new development will produce highly efficient solar cells. He and ECS student member James Hill predict the process will be able to effectively gather solar energy for use as fuel, further increasing the amount of hydrogen available for fuel usage.

“The work helps to solve the problem that solar energy is intermittent,” says Switzer. “Obviously, we cannot have the sun produce energy on one spot the entire day, but our process converts the energy into a form that is more easily stored.”

This from Missouri University of Science and Technology:

END_OF_DOCUMENT_TOKEN_TO_BE_REPLACED

How to Power the Future

Much like organic photosynthesis, artificial photosynthesis coverts sunlight into chemical energy. This highly-researched concept also has the ability to be carried into semiconductor technology.

Essentially, researchers can take the sun’s electrical power and split water into oxygen and hydrogen with high energy density levels. This type of development has the potential to replace current fossil fuels and create a type of energy that does not emit harmful carbon dioxide.

The concept has not been utilized on a commercial level due to the high cost. However, this new development could raise the efficiency levels to a high enough percentage to make the process economically viable.

This from the Helmholtz Association of German Research Centres:

Lead author Matthias May … processed and surveyed about one hundred samples in his excellent doctoral dissertation to achieve this. The fundamental components are tandem solar cells of what are known as III-V semiconductors. Using a now patented photo-electrochemical process, May could modify certain surfaces of these semiconductor systems in such a way that they functioned better in water splitting.

END_OF_DOCUMENT_TOKEN_TO_BE_REPLACED 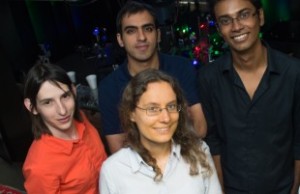 A team from Rice University, led by assistant professor and ECS member Isabell Thomann, has demonstrate a highly efficient way to harness energy from the sun though the splitting of water molecules.

Through the configuration of light-activated gold nanoparticles, the team was able to successfully harvest and transfer energy to what the scientists refer to as “hot electrons.”

“Hot electrons have the potential to drive very useful chemical reactions, but they decay very rapidly, and people have struggled to harness their energy,” said Thomann. “For example, most of the energy losses in today’s best photovoltaic solar panels are the result of hot electrons that cool within a few trillionths of a second and release their energy as wasted heat.”

If the hot electrons could be capture before they have the opportunity to cool, society could be seeing a significant increase to energy conversion efficiencies.