The plenary lecture is one of the highlighted events of the meeting, bringing participants together from every symposia to learn from some of the greatest minds in the field. 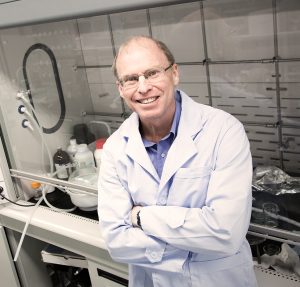 Rodney S. Ruoff is Distinguished Professor in the Departments of Chemistry and Materials Science, and the School of Energy Science and Chemical Engineering at the Ulsan National Institute of Science and Technology (UNIST), South Korea. He serves as Director of the Center for Multidimensional Carbon Materials (CMCM), an Institute for Basic Science at UNIST. From 2007 until he joined UNIST in 2014, Prof. Ruoff was the Cockrell Family Regents Endowed Chair Professor at the University of Texas at Austin, US. He earned his PhD in Chemical Physics from the University of Illinois-Urbana, US, in 1988, and was a Fulbright Fellow in 1988-1989 at the Max-Planck-Institut für Strömungsforschung, Germany. At Northwestern University, US, in 2007, Prof. Ruoff was the John Evans Professor of Nanoengineering and Director of the Biologically Inspired Materials Institute.

The Electrochemical Society Fullerenes Group—now known as the Nanocarbons Division—was founded in 1993 with Prof. Ruoff as Chairman and Karl M. Kadish as Vice Chair. Prof. Ruoff is a Fellow of the Materials Research Society, American Physical Society, American Association for the Advancement of Science, and Royal Society of Chemistry. He received the American Physics Society’s James C. McGroddy Prize for New Materials (2018), American Carbon Society SGL Skakel Award (2016), and Materials Research Society Turnbull Prize (2014). Prof. Ruoff has authored or co-authored some 500 peer-reviewed publications related to chemistry, physics, materials science, mechanics, and biomedical science. Clarivate Analytics named Prof. Ruoff a Citation Laureate for many years. He has been a Highly Cited Researcher in Chemistry, Physics, and Materials Science since such statistics have been reported.

Electrochemistry is intimately connected to carbon materials such as electrochemical synthesis, energy storage, catalysis, and for basic science such as of the redox behavior and studies of kinetics and thermodynamics of a variety of (electro) chemical processes (e.g., the formation of graphite intercalation compounds by electrochemistry). The ECS Fullerenes Group that evolved into the Fullerenes, Nanotubes, and Carbon Nanostructures Division, and then the current Nanocarbons Division, has further fostered interest in the electrochemistry of carbon and other related materials. I discuss efforts at the Center for Multidimensional Carbon Materials (CMCM) that hopefully exemplify the range and utility of electrochemistry for basic science: (i) Electrochemical functionalization of single crystal graphene on single crystal Cu(111) foil and the exquisite control that electrochemistry offers in ‘controlling’ chemical reactions at the graphene surface; (ii) Formation of what appear to be new forms of carbon in molten salts through electrochemical synthesis; (iii) “Scaled” electrochemical synthesis of a highly branched “polyhydrocarbon” that we found can be converted to diamond under moderate conditions, and (iv) The electrochemical synthesis of new types of graphite intercalation compounds. Time permitting, I’ll also discuss research related to homemade single crystal metal foils and their use to grow carbon materials by CVD-type syntheses and subsequent functionalization. One example is F-diamane (“single layer diamond”) formed by gas phase fluorination of AB-stacked bilayer graphene that had been grown on a single crystal Cu-Ni(111) foil, such foils being made from Cu(111) foils by electroplating desired amounts of Ni onto each side and annealing. Support from the Institute for Basic Science (IBS-R019-D1) is appreciated.