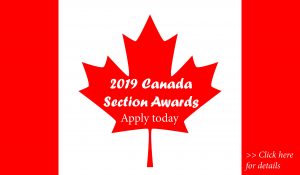 The Canada Section Student Award was established in 1987 to recognize promising young engineers and scientists in the field of electrochemical power sources. The award is intended to encourage the recipients to initiate or continue careers in the field. The award recipient will receive a $1,500 CAD prize and have the chance to present an award talk to section constituents.

Apply today to join the growing list of honorees and good luck!