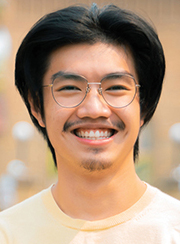 Matthew Liu is a PhD student in the Chemical Engineering Department at Stanford University and a NASA space technology graduate research fellow. A member of William Tarpeh’s lab, Matthew researches electrochemical reactive-separation processes to recover ammonia from nitrogen-rich wastewaters. He has a particular focus on electrocatalytic nitrate reduction, which has led him to investigate systems driven by heterogeneous catalysis, molecular catalysis, and single atom catalysis. Matthew is also interested in how the structure and composition of the microenvironment at the electrode-electrolyte interface directs nitrate reduction performance.

As an undergraduate studying at the University of California, Berkeley and researcher at Lawrence Berkeley National Laboratory, Matthew’s work also focused on energy and the environment. There he studied free-radical chemistry in aqueous aerosol under Frances Houle and electrochemical carbon dioxide reduction under Bryan McCloskey.

Matthew was recognized at the 241st ECS Meeting in Vancouver, BC, CAN, where he delivered his award lecture entitled “Reactive Separations to Remediate and Valorize Nitrogen-Polluted Wastewaters.” 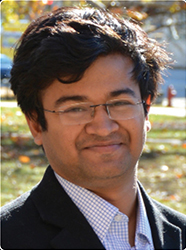 Arghya Patra is a PhD candidate and Mavis Future Faculty Fellow in the Department of Materials Science and Engineering at the University of Illinois Urbana-Champaign in Prof. Paul V. Braun’s research group. His thesis research focuses on developing an alternative electrochemical manufacturing route for conventionally used slurry-cast ceramic oxide cathodes for lithium and sodium ion batteries. His work has demonstrated controlled electrochemical growth of dense, highly textured, thick ceramic oxide films important for electrochemical energy storage. He earned a BTech and MTech in Metallurgical and Materials Engineering from the Indian Institute of Technology Kharagpur (2017). His undergraduate research focused on electrodeposition of porous metals as current collectors and tin-based ternary anodes for Li ion batteries.

The IE&EE Division student awards recognize and reward promising young engineers and scientists in the field of electrochemical engineering and applied electrochemistry.

Nominations for the 2023 awards are accepted through September 1, 2022. Learn more details about the awards by clicking on the award names above. Nominate a deserving student today!