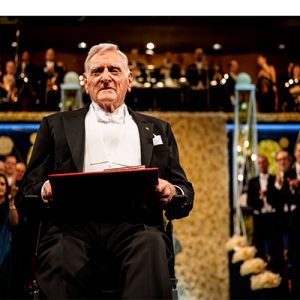 Nobel Laureates are required to give a lecture on a subject connected with the work for which they receive the award. Goodenough videotaped his lecture, “Designing Lithium-ion Battery Cathodes,” before December 8, then invited Manthiram to present it in Stockholm. Manthiram added explanations and comments between Goodenough’s slides and video, concluding with a summary of Goodenough’s research and its historical significance. The three classes of materials Goodenough discovered—layered oxide, spinel oxide, and polyanion oxide—still remain the only viable cathodes and the basis for future development. Goodenough pushed the boundaries of sold-state chemistry and physics. “His trump card is using chemistry and physics to solve engineering problems,” said Manthiram on another occasion.

At 97 years old, Goodenough is the oldest person to be awarded a Nobel Prize. He shared the 2019 Nobel Prize in Chemistry with Stanley Whittingham of Binghamton University, State University of New York (also an ECS Fellow), and Akira Yoshino of Meijo University, for their work on the development of lithium-ion batteries. All three are long-term ECS members. 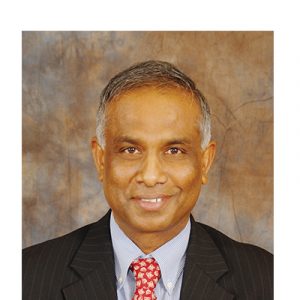 “Professor Goodenough is inspirational to many, including me,” said Manthiram. “Those of us who worked with him admire his dedication to science and care for humanity. He transformed the field of transition-metal oxide chemistry and physics with nearly seven decades of work with breadth and depth.”  Manthiram, who received the 2014 ECS Battery Division Research Award for excellence in battery and fuel cell research, has a long history with Goodenough. As a student in India, Mathiram studied from Goodenough’s book on metallic oxides. “We called it ‘the bible,'” said Manthiram. In 1985, Manthiram began his postdoc at Oxford with Goodenough, the “father of oxide chemistry.” He followed Goodenough to the University of Texas at Austin in 1986—and never left.

Summing up his experience with Goodenough, Manthiram said today, “His achievements are huge, but the thing I admire most is his heart and his kindness. From him I learned to focus on my work, to stay positive each day, and then good things will follow,”

Look for more information about ECS and Nobel laureates in the upcoming winter edition of Interface.