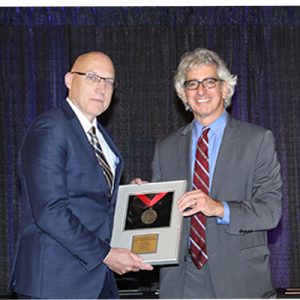 John W. Weidner of the College of Engineering and Applied Sciences at the University of Cincinnati received the 2019 Carl Wagner Memorial Award at the 236th Electrochemical Society (ECS) Meeting. The award recognizes mid-career achievement, excellence in research areas of interest of the Society, and significant contributions in the teaching or guidance of students or colleagues in education, industry, or government.

Weidner delivers “Mathematical Modeling of Electrochemical Systems” on Tuesday, 15 October, at 1140-1200 in Room 311.

John W. Weidner is an ECS Fellow and dean of the College of Engineering and Applied Sciences at the University of Cincinnati. He published 113 refereed journal articles and contributed to over 200 technical presentations in the field of electrochemical engineering. His research group created novel synthesis routines…for battery materials and electrocatalysts, and used a variety of electroanalytical techniques and developed sophisticated mathematical models to advance the fields of electrochemical reactors, advanced batteries, electrochemical capacitors, fuel cells, and electrolyzers.

Weidner has been active in ECS for over 30 years, including as past chair of the Industrial Electrochemistry and Electrochemical Engineering (IE&EE) Division and as a member-at-large of the IE&EE, Energy Technology, and Battery Divisions. He currently serves on the Interface Advisory Board. He was the inaugural editor of ECS Transactions and technical editor for the electrochemical engineering topical interest area for the Journal of The Electrochemical Society. He is a fellow of ECS and the American Institute of Chemical Engineers (AIChE).

ECS values recognition. The Carl Wagner Memorial Award was established in 1980. It is one of the awards in the ECS Honors & Awards Program which has recognized professional and volunteer achievement within our multi-disciplinary sciences for decades.

The Carl Wagner Memorial Award recipient receives a silver medal and a corresponding wall plaque; complimentary meeting registration for the award recipient and companion; a dinner held in the recipient’s honor during the designated meeting; and Society Life Membership. The award commemorates Carl Wagner, a man of outstanding scientific achievement with important contributions in all areas of the Society’s interest. The Society’s first Palladium Award winner, Wagner was a dedicated teacher.