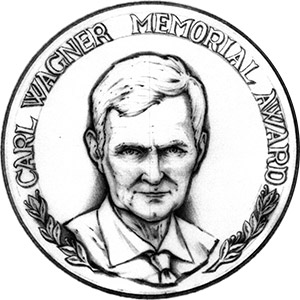 The Carl Wagner Memorial Award was established in 1980 to recognize mid-career achievement, excellence in research areas of interest of the Society, and significant contributions in the teaching or guidance of students or colleagues in education, industry, or government.

The Award Recipient will have made significant research achievements in areas of interest to the Society and contributed strongly to the guidance and development of students or associates in education, industry, or government. The Recipient will have attained a level of professional achievement that, in the judgment of the Carl Wagner Award Subcommittee, justifies the objective of recognizing mid-career achievement. The research and teaching or guidance being recognized should encompass interdisciplinary breadth. The recipient does not need to be a member of The Electrochemical Society.

Nominations shall be considered in effect for two consecutive award cycles. Sponsors and endorsers should be members of The Electrochemical Society.

The award consists of a framed scroll, sterling medal, complimentary meeting registration for award recipient and companion, a dinner held in recipient’s honor during the designated meeting, and Life Membership in The Society. The recipient is eligible for travel reimbursement of up to US $1,000. The recipient will receive the award in person at the designated meeting of the Society and deliver a general address to the Society on a subject related to the contributions for which the award is being presented.

The award commemorates Carl Wagner, a man of outstanding scientific achievement with important contributions in all areas of the Society’s interest, the Society’s first Palladium Award winner, and a dedicated teacher.