The plenary session is one of the highlighted events of the meeting, allowing participants from every symposia to come together and acknowledge some of the greatest minds in the field. 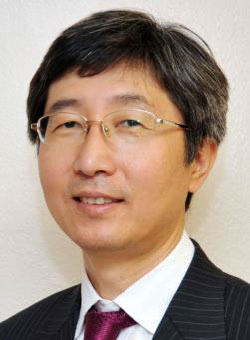 “Perovskite Solar Cells: Past 10 Years and Next 10 Years” by Nam-Gyu Park, Sungkyunkwan University

Nam-Gyu Park is professor and SKKU-Fellow at the School of Chemical Engineering, Sungkyunkwan University. Seoul National University awarded him a BS degree in chemical education (1988), and MS and PhD degrees in chemistry (1992 and 1995). Professor Park’s postdoc was at the Institut de Chimie de la Matière Condensée de Bordeaux (ICMCB-CNRS), France (1996-1997), and the National Renewable Energy Laboratory, US (1997-1999). He was director of the Solar Cell Research Center at the Korea Institute of Science and Technology (KIST) from 2005 to 2009. Prof. Park served as principal scientist at the Electronics and Telecommunications Research Institute (ETRI, 2000-2005) before joining Sungkyunkwan University as a full professor (2009). He was named a fellow of Korean Academy of Science and Technology (KAST) in 2017.

Since 1997, Prof. Park’s research has focused on high efficiency mesoscopic nanostructured solar cells. He pioneered the solid state perovskite solar cell, which was first developed in 2012. Clarivate Analytics singled out Prof. Park as a Citation Laureate (scientist worthy of a Nobel Prize) in 2017, and a Highly Cited Researcher (top one percent of scientists) in 2017 and 2018. He received numerous awards including Scientist Award of the Month (Korea Ministry of Science and Technology, 2008), KIST Award of the Year (2009), DuPont Korea Science and Technology Award (2010), Sung Kyun Kwan University Fellowships (SKKU, 2013 and 2018), PVEC Hamakawa Award (2015), Dukmyung KAST Engineering Award (2016), ACS-KCS Excellence Award (Korean Chemical Society, 2018), and Ho-Am Foundation Prize (2018). Prof. Park has more than 270 refereed publications and over 70 patents. He received an h-index of 82 from Google Scholar and 70 from Web of Science (as of April 2019). He is senior editor of ACS Energy Letters and serves on the Editorial Advisory Board for Chemical Reviews, ChemSusChem, and Solar RRL.

Since the first report on the 9.7% efficient and 500 h-stable solid-state perovskite solar cell (PSC) in 2012, following two seed reports on perovskite-sensitized liquid junction solar cells in 2009 and 2011, research on perovskite photovoltaics has surged due to the high power conversion efficiency (PCE) obtainable via facile fabrication procedures. As a result, a PCE of 25.2% was recorded in 2019. According to Web of Science, the number of publications on PSCs has grown exponentially since 2012, leading to more than 15,500 accumulated papers, which indicates that PSCs are considered as promising next-generation photovoltaics. Over the past 10 years, high photovoltaic performance has been realized through compositional engineering, device architecture, and new coating methodologies. To reach a theoretical efficiency over 30% and commercialization of PSCs, further studies on recombination and developments of scalable technologies are required. In this talk, the importance of interfacial and grain boundary engineering to reach the theoretical efficiency with voltage over 1.3 V and fill factor over 0.9 is emphasized. For commercialization, new materials may be required because the current precursor mixture is problematic due to the underlying aging effect. We developed cost-effective materials based on delta FAPbI3 powder for reproducibly high efficiency PSCs. Large-area uniform perovskite coating is also important in upscaling PSCs. Acetonitrile-based and 2 methoxy ethanol-based coating solutions were developed for large-area perovskite films. In addition, additive engineering and bifacial stamping technique were found to be effective ways for upscaling PSCs. Stability will be also discussed in this talk.