Gather with your colleagues

The plenary session is one of the highlighted events of the meeting, allowing participants from every symposia to come together and recognize some of the greatest minds in the field.

ECS President Yue Kuo will wrap up the first full day of AiMES 2018 by welcoming the ECS and SMEQ meeting attendees and introducing the highly anticipated lecturer, Luis A. Godinez from the Centro de Investigacion y Desarrollo Tecnologico en Electroquímica. His talk is “Electro- and Photo-Electro-Chemical Generation of the Fenton Reagent. Some Approaches for the Development of Electrochemical Based Advanced Oxidation Processes for Water Treatment.”

Be sure to add the talks of the Society, division, and section award winners to your meeting online program, they are in various symposia throughout the week.

“Electro- and Photo-Electro-Chemical Generation of the Fenton Reagent. Some Approaches for the Development of Electrochemical Based Advanced Oxidation Processes for Water Treatment” by Luis A. Godínez, Centro de Investigacion y Desarrollo Tecnologico en Electroquímica 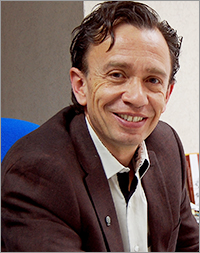 Luis A. Godínez was born in Mexico City in 1967. After completing a chemical engineering and a MSc degrees in physical chemistry at the National Autonomous University of Mexico, he moved to the USA to pursue graduate studies at the University of Miami where he obtained a PhD in physical chemistry and later, completed a post-doctoral appointment at the University of South Florida, after which he moved back to Mexico to work as a researcher at the Centro de Investigacion y Desarrollo Tecnologico en Electroquímica (CIDETEQ).

The work that will be presented, deals with electrochemical advanced oxidation processes that employ electro-Fenton based reactions to treat wastewater. The explored approach employs packed activated carbon columns as cathode materials for oxygen reduction and iron loaded resins, as the source of the Fenton mixture which produces a powerful oxidant species. Using this approach novel activated carbon regeneration processes were developed as well as electrochemical reactors designed for the removal of persistent contaminants; such as helminth ova in human wastewater.

The technology potential of the electro-Fenton approach is important since water management is particularly complicated in a country like Mexico in which there are serious problems for water accessibility as well as industry related pollution.

It is well known that clean water for human consumption is rapidly becoming an essential resource and the development of cost-effective water treatment technologies is an increasing strategic factor for economic growth. In this context, Advanced Oxidation Processes (AOP) constitute a very interesting approach since they are characterized by the use of the hydroxyl radical, a powerful oxidant species that can be prepared by several methods. Among these, a combination of H2O2 and Fe2+ ions, commonly known as the Fenton reagent, is an easy and effective synthetic method that has been known for over a century. The main limitation for its use in commercial water treatment processes however, relies on the fact that H2O2 solutions are expensive and difficult to handle and that the iron containing aqueous solutions resulting from the AOP must be treated in a further stage to remove the metallic species.

At the Electrochemistry Research Center in Mexico, we have been working for several years in the development of electrochemically based approaches to prepare the Fenton reagent, so that polluted solutions can be cleaned up in processes that avoid both, the need to handle concentrated H2O2 solutions and the Fe removal requirement posed by the traditional Fenton technology.

Therefore, in this talk, electro- and photo-electrochemical studies for the in-situ preparation of the Fenton reagent are presented. We first discuss an electricity-based approach that focused on the production of diluted H2O2 solutions from the cathodic reduction of dissolved oxygen in solution. The effectiveness of the Electro-Fenton processes was followed by the absorbance decrease of a model dye solution and an improvement of this electrode performance was tried and assessed by using an air diffusion gas electrode that substantially increases the concentration of oxygen at the electrode surface. The Electro-Fenton approach was complemented by the use of nanocrystalline semiconductor electrodes in the anodic part of the cell and UV light was employed to promote not only anode activation but photo-assisted ferrous ion regeneration. In this regard, TiO2 electrophoretic deposits on conducting glass and optic fibers were also developed in order to prepare and study novel anodes that can be illuminated from within; i.e., directly with the UV light conducted by the fiber.

Another problem that was approximated with these AOP reactors was related to the iron ions administration. In this way, an iron-supported system using cation exchange resins was developed and its effectiveness and cost were assessed by comparing it with the use of an iron loaded Nafion membrane. The incorporation of an effective iron supporting system is important because it removes the need to eliminate iron in a further stage of the cleaning processes, thus reducing substantially the investment and operation costs of the water cleaning process.

Using these concepts a photo-electro-Fenton industrial prototype was constructed and studied in terms of the relationship of its operational variables for the discoloration of a model dye aqueous solution. In this way, a design of experiments allowed us to asses not only which is the minimal set of variables that control the operation of the reactor, but also an empirical equation that predicts its performance.

Another important extension of this investigation was related to the use of three-dimensional electrodes prepared from a packed bed of activated carbon. The cathode employed in these studies consisted on a mixture of adsorbing conducting carbon particles that were cathodically protected from hydroxyl radical oxidation, and on iron-loaded resin units that would deliver an appropriate interphasial concentration of ferrous ions to obtain the Fenton reagent. This approach resulted also in a novel electrochemically based Fenton approach to regenerate activated carbon columns and reactors capable of cleaning water contaminated with biologically dangerous species. Specifically, the potential of these reactors for treating human wastewater was explored.

As a conclusion we will try to show that we have been developing potentially promising electro- and photo-electro processes to prepare the Fenton reagent; processes that remove some of the most important limitations of its industrial application.