Gather with your colleagues!

The plenary session is a highlight of every ECS meeting, bringing participants from all symposia together to celebrate some of the greatest minds in the field.

ECS President Eric Wachsman wraps up the first full day of the 241st ECS Meeting, welcoming attendees and introducing the highly anticipated lecturer, Jeff Dahn from Dalhousie University. His talk is “Modern Lithium Ion Batteries: More than One Million Miles and Possibly a Century of Life.”

The agenda also includes the presentation of these awards:

Henry B. Linford Award for Distinguished Teaching of The Electrochemical Society

Be sure to also attend the Society, division, and section award winners’ talks, presented in symposia throughout the week. Check the online program for specific dates and times and add them to your personal meeting schedule.

Modern Lithium Ion Batteries: More than One Million Miles and Possibly a Century of Life
by Jeff Dahn, Dalhousie University 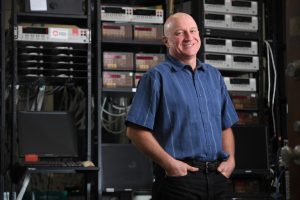 Jeff Dahn is Professor, Canada Research Chair, and NSERC/Tesla Canada Industrial Research Chair at Dalhousie University with dual appointments in the Department of Physics & Atmospheric Science and Department of Chemistry. He is recognized as one of the pioneering developers of the lithium ion battery used worldwide in laptop computers and cell phones. Prof. Dahn’s recent work focuses on increasing the energy density, improving the lifetime, and lowering the cost of lithium ion batteries.

Born in Bridgeport, CT, in 1957, Prof. Dahn immigrated with his family to Nova Scotia, Canada, in 1970. He obtained his BSc in Physics from Dalhousie University in 1978 and PhD from the University of British Columbia in 1982. Prof. Dahn worked at the National Research Council of Canada from 1982-1985 and at Moli Energy Limited from 1985-1990 before taking up a faculty position in the Physics Department at Simon Fraser University in 1990. There he collaborated strongly with the R&D team at NEC/Moli Energy Canada (now E-One/Moli Energy Canada). Prof. Dahn returned to Dalhousie University in 1996 and starting in 2016, began a five-year partnership with Tesla which has been extended until 2026.

Prof. Dahn is the co-author of over 750 refereed journal papers and 73 inventions with patents issued or filed. A member of ECS since 1991, the Society has recognized his research with Fellow of The Electrochemical Society (2012); 2011 ECS Battery Division Technology Award; 2006 ECS Canada Section Electrochemical Award; and 1996 ECS Battery Division Research Award. Other national and international awards Prof. Dahn received include Officer of the Order of Canada (2020); Fellow of the Royal Society of Canada (2001); 2017 Gerhard Herzberg Gold Medal in Science and Engineering (Canada’s top science award); and 2016 Governor General’s Innovation Award.