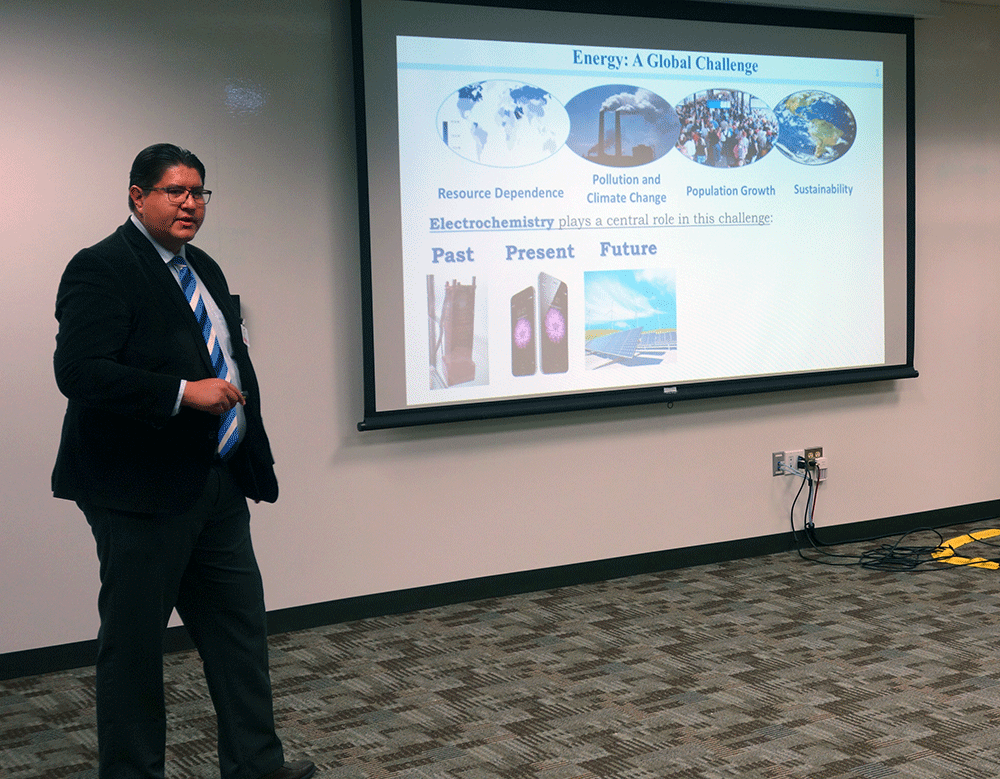 In 2014, ECS and Toyota Research Institute of North America came together to establish the ECS Toyota Young Investigator Fellowship to support young researchers working in green energy technology. The partnership between ECS and Toyota aims to leverage the Society’s network of researchers, awarding fellowship winners a minimum of $50,000 to pursue novel research over a one year period.

“We try to give folks the opportunity to do research that is a little more outside of the box,” said Paul Fanson, manager of Toyota’s North American Research Strategy Office, “where they might have difficulty getting funding somewhere else.”

As this year winds down and the 2016-2017 fellows come to the tail end of the research period, fellowship winners Elizabeth Biddinger, City College of New York; Joaquin Rodriguez Lopez, University of Illinois at Urbana-Champaign; and Joshua Snyder, Drexel University recently took their work to Toyota’s site in Ann Arbor, Michigan, to report their findings, connect with industry researchers, and explore opportunities that extend beyond the funding time period.

(MORE: Listen to our podcast with Elizabeth Biddinger on green energy technology.)

During the visit, each fellow delivered a presentation to the entire Toyota division, discussing the overall scope of the research before participating in breakout sessions, where the winners met with specific research groups that are more directly connected to their topical areas.

“We like to bring all the winners together at one time to our site here in Michigan,” Fanson said. “It’s a way to wrap up the one year program and we also use it as a networking opportunity.”

In addition to presenting their work to potential industrial collaborators, the fellows were able to learn about some of the research being developed at Toyota, connecting fundamental work to applied research.

“We hope that by showing the fellows some of the work that’s being done internally at Toyota, we can build a deeper relationship with the faculty going forward,” Fanson said. “I view this whole program as a kind of conversation starter.”

For Rodriguez Lopez, who presented his work, “Achieving the Ultimate Performance of Fuel Cell Electrocatalysts via Programmable Electronic Control of Surface Reactivity,” the trip to Toyota allowed for an opportunity to highlight his exciting research findings developed throughout the year as well as receive feedback and advice for moving forward in the work.

“The interactions that we had at Toyota were so different than the interactions that we normally have with academics,” Rodriguez Lopez said. “People that work in industry, specifically at the Toyota site, are trying some really interesting ideas, so they have very specific questions about our approach. I think that significantly raises the level of discussion.”

Over the one year fellowship period, Rodriguez Lopez and his team worked on developing a new analytical platform that allows them to take a closer look at electrocatalysts. This work is beneficial on a fundamental level, but also extends to look at oxygen reduction reactions, which are key reactions behind several technologies such as fuel cells and metal air batteries.

According to Rodriguez Lopez, working with Toyota helped his research team broaden their perspective beyond the fundamental nature of the research, allowing them to think outside the box and look at much larger implications.

“Perhaps our research could actually work into developing a fuel cell,” Rodriguez Lopez says. “That really got us thinking about not only constructing a platform that we can use in the lab, but even potentially how we can scale it and make this into a larger technology.”

While the one year research period is winding down for the 2016-2017 winners of the ECS Toyota Young Investigator Fellowship, the doors of opportunity are just beginning to open. Fanson hopes that this fellowship will allow Toyota to connect with young researchers working on exciting technology, with the potential for relationships to last long into the future. As for researchers like Rodriguez Lopez, he and his team hope to continue the work that grew out of this fellowship and to extend industry connections with partners like Toyota.

“This has been a special opportunity for me,” Rodriguez Lopez said. “I think the ECS Toyota Young Investigator Fellowship is a great opportunity to put out less conventional ideas. Even though the approach we’re taking is high risk, in one year, with the support of the fellowship, we were able to make an incredible amount of progress.”

As the fellowship continues to grow, with the third generation of winners named in June of 2017, Rodriguez Lopez believes its impact will continue to grow, bolstering the careers of young investigators and providing a platform for innovative research that address some of the world’s most critical issues.

“In 10 or 20 years I’d like to be able to look back at list of people who have benefited from this program and have done some incredibly good science and say, ‘Look, I’m part of the second generation that won that award,’” Rodriguez Lopez said. “In 20 years, maybe I will look back at this proposal and realize how much impact it had on my long-term career, and I will be able to pinpoint that this program is what made the difference.”