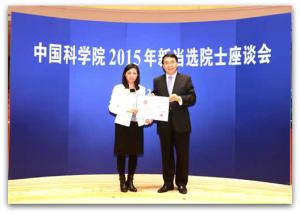 As some of you have known, CSTIC Executive Committee Member, Prof. Ru Huang of Peking University, has been elected to the 2015 class of Academicians of the Chinese Academy of Sciences.

Prof. Huang has been a member of the CSTIC Exective Committee and Chair of CSTIC Symposium I: Design and Device Engineering since 2009. She has been instrumental in shaping the agenda and leading CSTIC Symposium I over the years. 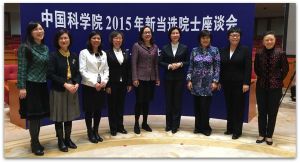 Election to the Chinese Academy of Sciences represents the highest level of national honor for Chinese scientists.

Take a look at some of Huang’s published research. 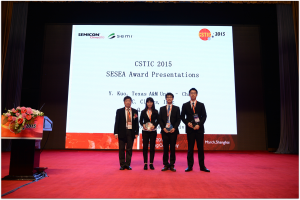 Kuo and three student award winners at CSTIC 2015. (Click on photo to enlarge.)

ECS and SEMI are pleased to announce that the annual China Semiconductor Technology International Conference (CSTIC 2015) successfully concluded on March 16th in Shanghai, China with about 311 speakers and 606 attendees from around the world.

END_OF_DOCUMENT_TOKEN_TO_BE_REPLACED

Plan now to participate at CSTIC 2015, one of the largest and the most comprehensive annual semiconductor technology conferences in China.

We invite you to submit your papers now for the China Semiconductor Technology International Conference 2015, one of the largest and the most comprehensive annual semiconductor technology conferences in China. CSTIC is organized by SEMI and IEEE, co-organized by China’s High-Tech Expert Committee (CHTEC). It is co-sponsored by ECS, MRS and China Electronics Materials Industry Association. CSTIC 2015 will be held on March 15-16, 2015 at the SHICC, Shanghai, China, in conjunction with SEMICON China 2015. It will cover all the aspects of semiconductor technology and manufacturing, including devices, design, lithography, integration, materials, processes, manufacturing as well as emerging semiconductor technologies and silicon material applications. Hot topics, such as 3D integration, III-V semiconductors, carbon nanoelectronics, LEDs, and MEMS. And CPTIC 2015 has joined CSTIC 2015 as Symposium XII : Si Materials and Photovoltaic Technology.

We are soliciting papers from authors around the world on all aspects of semiconductor and photovoltaic technology and manufacturing, including semiconductor design, Frond-End-of-Line (FEOL), Back-End-of-Line (BEOL), packaging, testing, as well as emerging semiconductor technologies; photovoltaic market, policy, power grid, device, design, process, tooling, materials, and fundamental study between China and the rest of the world with a focus on industrial applications.