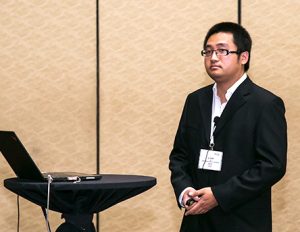 Haodong Liu, a postdoc research fellow at UC San Diego, is the award winner of the Battery Division Postdoctoral Associate Research Award Sponsored by MTI Corporation and the Jiang Family Foundation for his work on “Stable Li Metal Anode through Designed Solution Chemistry and Electrode Architecture.” Liu was presented with the award at AiMES 2018 in Cancun, Mexico.

Liu says being recognized for his work has been an exciting experience, bringing recognition to his name and research within the battery field. However, it has also meant something more to him in particular.

“Since my citizenship is in China, and a lot of the scholarships here are only for the US citizens, this is a good chance for international postdocs to get awards and be recognized,” explains Liu. “ECS only cares about the quality of the work you’re doing instead of what’s your citizenship status. That’s why I really appreciate ECS.”

Liu says previous to the Battery Division Postdoctoral Award, most awards were focused primarily on awarding students and professors.

“The Battery Division Postdoctoral Associate Research Award will inspire a lot of postdocs, it welcomes a variety of ideas and high-quality work,” says Liu.

He says he is grateful to ECS, the MTI Corporation, and the Jiang Family Foundation.

“There was not a Battery Division Postdoc Award until they began sponsoring it two years ago,” says Liu. “We really appreciate their support.”

He says before AiMES 2018, other researchers in the field were already aware of his award status.

“Professors in the field started sending me emails and congratulating me,” says Liu. “And previously, I did my work and published in some journals, but there are so many papers published every day, professors don’t have time to read every article. But since I got the award, some professors have started checking who I am and what I’ve accomplished.”

Liu has been an ECS member since 2014. That same year, he founded the ECS UCSD Student Chapter, which promotes the interest and advancement of electrochemistry science and technology among both graduate and undergraduate students.

“I ran it for two years, and then, I passed to the other students to manage it,” says Liu. “It’s going well. We have a lot of seminars every quarter, and sometimes, we report our activities, our events, in the ECS Interface magazine.”

He says as an ECS member, he found many benefits including free access to ECS Digital Library papers and weekly email about activities and news within the Society.

Liu is the author and co-author of more than 30 peer-reviewed journal articles and three U.S. patents.