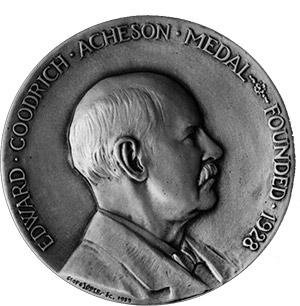 The Edward Goodrich Acheson Award was established in 1928 to recognize distinguished contributions to the advancement of any of the objects, purposes or activities of The Electrochemical Society.

The recipient should be distinguished for contributions consisting of: (a) discovery pertaining to electrochemical and/or solid state science and technology, (b) invention of a plan, process or device or research evidenced by a paper embodying information useful, valuable, or significant in the theory or practice of electrochemical and/or solid state science and technology. The recipient must be a member of The Electrochemical Society, since distinguished service to the Society is also an award requirement.

Nominations shall be considered in effect for two consecutive award cycles.

The award consists of a gold medal and a plaque that contains a bronze replica of the medal thereof, both bearing the recipient’s name, the sum of US $10,000, complimentary meeting registration for award recipient and companion, a dinner held in recipient’s honor during the designated meeting, and Life Membership in the Society. The recipient will receive the award in person at the designated Society meeting and deliver a general address on a subject related to the contributions for which the award is being presented.

Edward Goodrich Acheson was an American chemist and the 6th President of The Electrochemical Society who invented the Acheson process, which is still used to make silicon carbide (carborundum) and later a manufacturer of carborundum and graphite. Acheson worked with Thomas Edison and experimented on making a conducting carbon to be used in the electric light bulb.